3 Reasons Why Coil Cords are Important in a Wireless World 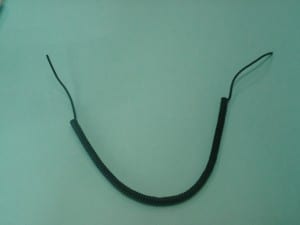 Coil cords are everywhere, from the back of a semi truck, to a camera’s flash strobe to the arcade games where you manipulate a claw to pick up a toy. Coil cords are used in a wide variety of industries too. Coiled cables are used by the medical industry, security industry and industrial control industry to name but a few. And in this age of everything wireless a good question is why would anyone use a coiled cord? So no matter what you call it, a coil cord, curly cord or coiled cable this article will give some reasons why a coil cord is still the right solution for many applications.

1) There are three main reasons to use a custom coil cord instead of wired solution. The first is power. While wireless solutions exist for many application when electrical power needs to be supplied it almost always is done with wire or cable. When something is wireless it means the product uses radio waves of some sort. Radios that we listen to are one example of just such a product. We could connect all radios with coil cords and send the signal along the cord, but that isn’t practical for long lengths of distances, so radio waves are used to send the signal. When radios waves are sent they move in all directions and don’t really care what they hit, and don’t react with anything but antennas “tuned” to their frequency.

Power is different. If power was transmitted like radios wave it would interact with anything metallic in its path. And if the metallic object was connected to something the power would transfer from the metal to the object. This would act as conductors, and could be very bad as in the extreme case of lightning, which is a very powerful wave of energy. So cables, and coil cords, are used as a part to transfer power for obvious safety reasons.

2) The second reason coiled cables are used instead of wireless is to avoid electronic noise. We live in a world filled with radio waves all around us. Often custom coil cords are used instead of radio waves because the items needing the signal would be damaged or impaired by other signals. A classic representation of this is again a radio, only the old AM kind. We have heard static and other stations fade in and out on radios. The static we hear is noise. If a coiled cord was used instead of radio waves, and the radio was shielded from outside waves, we wouldn’t hear static. However connecting all radios with coil cords is impractical, but in an operating room it isn’t. This is why cables and coil cords are often used in hospitals.

3) The third reason to use a coil cord instead of wireless signal is security. In the early days of cell phones, it wasn’t unusual to be talking with someone one moment and the next be speaking with someone else. This was because the cellular phone systems and their suppliers at that time were not as advanced as now. For most people this is not an issue, but if you are in the military it can be a matter of life or death. Having a coiled cable transmit signal or power ensures there will be no interruptions. Imagine a surgeon in the operation room losing power at a critical point in surgery. This is why where failure is not an option coiled cords are often used.

Wireless products are great, and they have made our lives much more mobile and easy. However as the above points show custom coil cords and cables are still very necessary. If you need power, a clean signal or security of transmission a coiled cable is a great solution. Meridian Cable manufactures and designs coil cords for any coiled cable need you have.