What are the Different Types of RF Cable Assemblies? 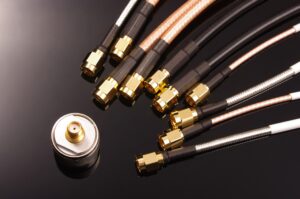 Even though you have probably seen a radio frequency (RF) cable before, you might not know what you are looking at. Though they are commonly referred to as coaxial cables, RF cables, and RF cable assemblies can be used in slightly different ways than standard coaxial cables. In fact, several different types of RF cables and RF cable assemblies are used in truly next-gen applications.

As one of the leading manufacturers of custom cable assemblies and wire harnesses, Meridian Cable has the inside scoop on all things cable. We’ll explore and explain what an RF cable assembly is, the different types of RF cable assemblies, and how they can benefit your business. Let’s untangle these cable mysteries together, shall we?

What is an RF Cable Assembly?

When looking at an RF cable, the key identifying component is the connector. An RF cable connector typically has a single pin in the middle of the connector surrounded by an outer casing that forms a secure connection. This unique design enables the RF cable to have a tight connection to the port and can help prevent interference.

Unlike their close cousin, television coaxial cables, RF cables have a shorter length that they can viably transmit signals. This means that RF cable assemblies are often close to their equipment and require specific elements to protect against electromagnetic interference (EMI).

Each RF cable contains a shielding layer to help defend against EMI in electronically noisy environments. This protection is particularly essential for telecommunication, medical industries, and military applications. Additionally, the secure connection design on RF cables helps to ensure that the cable will not be easily removed or allow other interference. The built-in protection of an RF cable assembly helps to block EMI from damaging or destroying data. Naturally, this makes them highly valuable in a range of industries.

RF cables are composed of four main components. Each cable will include an inner conductor, insulation, shielding, and an outer jacket. Different types of RF cable assemblies can include other elements, depending on the equipment that the RF cable assembly is for.

Now that we’ve covered the basics, let’s get into the particular types of RF cable assemblies. Though they will all accomplish the same generic functions, each cable is best for a specific area or equipment type. There are several to cover, and each will have unique properties. However, the main distinguishing factor between each RF cable assembly is the connector type. You’ll see these connections in radios, antennas, surge protectors, and other various kinds of electrical gear.

Before we get into that, however, we need to distinguish between the different genders of cable connections. The male connector on an RF cable has a single pin in the center of the connection, whereas the female connector has a jack or socket to which the male end can be connected.

First up are type-N RF cable assemblies. Type-N’s have been around since the 1940s and are both durable and capable cable connectors. They were first invented as a weather-proof option for connecting antennas to equipment in harsh outdoor conditions. Because they are tough cables, they are typically used outdoors and have high resilience to hazards like moisture, cold, heat, and debris.

UHF is another type of RF connector that can handle higher frequencies than a standard RF cable. UHF connectors have the capacity to transmit signals up to 100 MHz. Unlike type-N’s, the UHF connections are not water-proof, so they are more suited for indoor uses. Though they can handle higher frequencies, they also carry a less constant current. This means they can lose or have inconsistent signals in certain situations.

You will often see UHF RF cable assemblies in radio applications. They can be found in industrial capacities and personal uses, such as amateur radios or Citizen band radios. Because they can handle higher frequencies, these RF cables tend to be highly sensitive to specific equipment. However, when used correctly, they are quite capable and effective.

Bayonet Neill–Concelman (BNC) connections are a clever type of cable designed to be fast attached and released. First being used in military applications, these RF cable assemblies are convenient options for portable or mobile systems. These cables are best used in low-frequency equipment as they only have a capacity of 2 GHz. This makes them well-suited for visual equipment like television or monitoring systems.

Because they are made to connect quickly, BNC RF cable assemblies have various uses. While commonly found in the military or medical industries, BNC RF Cable assemblies can be found in any field that needs a mobile visual component like a monitor.

Threaded Neill–Concelman (TNC) connectors are threaded versions of BNC cable connections. They offer a more secure connection and can handle higher frequencies than their BNC counterparts. With the capacity to manage up to 11 GHz, TNC RF cables have a more comprehensive range of uses. They are also waterproof, which means they are well-suited to be used outdoors, as well as indoors. While they do not connect or disconnect as quickly as a BNC cable will, they are still a highly capable cable assembly option.

SubMiniature version A (SMA) Cable connections are a minimalist connection that was first invented in the 1960s. They feature a simple connection with small threading to add security. Initially, these cables only had the capacity to handle up to 12 GHz, but now are capable of 18 GHz or, in some cases, up to 24.5 GHz.

SMA RF cable assemblies are highly adept in several areas of the technology world. Because they have a high capacity and a threaded connection, they are popular in antennas, radio, and telecommunications. With excellent performance and a secure connection, these SMA RF cable assemblies are a great option for many applications—contact our team to discuss the benefits for your project.

How a Custom RF Cable Assembly Can Be Useful

First, RF cable assemblies will have a simple connection mechanism to your equipment. With several varieties featuring a quick release/connection, getting an RF cable assembly won’t take a full engineering degree. This feature makes them convenient, as well as capable.

Because they are typically designed with built-in insulation and shielding, RF cable assemblies are known for their durability. With waterproofing capabilities, several types can be used in a broader range of industrial settings.

Each RF cable assembly has a shielded layer, so they are excellent for technologically heavy environments. This quality gives protection for your data and signal as it transfers between equipment.

Get Started on a Custom RF Cable Assembly Today

That may have been a lot of info on RF cable assemblies. Luckily, our engineering team would be glad to walk you through any questions you have to help get your project started. Contact us today to learn more about partnering with Meridian Cable for a tailored solution.